It’s been forever since I wrote a blog, mostly because I was much too serious in my blogs, and I was driving myself insane.  I mean, I’m a mom.  I am way too good at lecturing and all too aware of how easily I am ignored when I am in lecturing mode.  So, no more lectures and a little more reality.

This morning opened with a nice little dose of reality.  As a background, I have to tell you I’m one of those urban chicken people.  Have been since March.  I try to pretend I live on a farm by owning a few chickens and growing a few tomatoes, although I really live in the suburbs and would starve in a week if I had to grow my own food.

This morning I was wakened just before dawn by a chicken. I listened for a moment and tried to pretend I was hearing a crow.  But it wasn’t a crow.  No, it was definitely a chicken.  As I am rather terrified of bothering my neighbors, especially before dawn, I slipped on my shoes and trekked out in the dark to the coop. 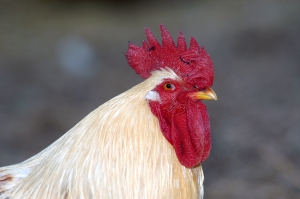 There I was met by a lone chicken, standing in her run, clucking as loud as a chicken can cluck, and they can cluck loudly.  She was lit by a dusk-to-dawn lamp in my neighbor’s yard, and when she saw me she didn’t stop clucking. I don’t usually lock them in the coop because my husband works second shift and we sleep a little later than chickens like to sleep, and when they are locked in their coops all morning they cry.   This morning I was pondering the wisdom of that decision.

She had enough food, so I stepped into the run, which is currently a mud pit, to check her water.  As I did so, I almost ran headlong into an enormous spider web inhabited by an enormous garden spider.  Remember it is still nearly dark, and I’d just walked through a patch of trees to get out here, and I am now imagining that I will be attacked by spiders all the way back to the house. I had a good case of the heeby jeebys at this point, and I rather hated chickens.

But the chicken had water.  I pulled up a few stalks of flowering crabgrass, which is a favorite of my birds, tossed that in, and still, this hen is letting me know in her loudest voice that I haven’t solved her problems yet.

Here is where my soft urban core starts to show, for I begin speaking to said bird in my most soothing voice, trying to talk it into being quiet.  This is followed by shushing noises and the sinking feeling that I am going to have a neighbor on my doorstep later in the day screaming at me, which to my introverted self is worse than having to eat glass.

At last, I determined the chicken’s problem.  With a loud cluck and a soft thud, another chicken woke up and fluttered out of the coop, and the first hen began to peck happily at the food in her bowl.  She was lonely, but now that someone else was up, all was well.

I was still outside in the dark with two large trees I just knew were filled with attack spiders between me and the house, so I turned and walked slowly and silently forward, my hand outstretched to make sure I didn’t get a spider in the face, and I ducked low into the door, because sometimes webs cover the top of the doorway, and I stood in the house a moment in the dark and wondered why I couldn’t just be a happy suburbanite like everyone else.  Wouldn’t I rather be a soccer mom than a farmer wannabe?

I climbed back to bed, and eventually I returned to sleep, oversleeping and starting my day late.  The hen is quite happy now, as her whole little flock is awake and scratching around with her.  Personally, I’m thinking she’d make great soup, but I’m a soft-hearted urban chicken gal, so likely I’ll never be able to turn any of them into soup, which will cause its own host of problems down the road.

Dreams are good.  But some days I think perhaps dreams on paper are much wiser than trying to make due when they can’t be realized.  And if I do ever get my dream farm, away from my neighbors, I vow happily to ignore all chicken noises before dawn.  Lonely chickens can fend for themselves.

My name is Jill Penrod. I'm a fiction novelist (check out my Facebook link below!!). But I'm also a near-empty nester looking to regain things I've lost. My verse this year is Jeremiah 6:16, where God tells Israel to stand at the crossroads and choose the ancient path that leads to peace. My journey this year is to declutter my space, honor God with my time and my gifts, seek Him in new ways, and see what He speaks to my soul as I do. I'd love for you to join me on my journey.
Join 73 other followers