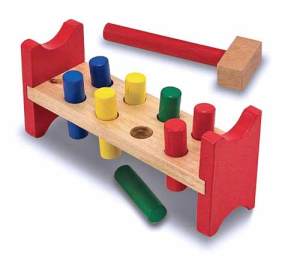 There was a certain man who had a lovely square peg.  The peg helped him feed his family, gave him something to discuss with friends, and set his place in the world.  But one day, the spot for the peg disappeared, and the man was left to search for another.   Ten or twelve times daily he would find other spots, but always the square peg didn’t fit into the round or oblong or triangular spots around him.

Finally, after months and months and months of trying to force the square peg into non-square spots, the man realized it was time for a new peg.  He lamented the loss, for the peg had once given him great comfort, and he had worked hard for it.  But, he put it aside and went to find another peg to fit more common holes.  He didn’t know how his family would survive while he quested for another peg, but he also knew he couldn’t keep trying to deal with his old peg.  And so he started a journey, a journey he continues to follow, a journey people don’t always understand.  The man dropped his old peg and, with a deep breath, set off into the world to locate a peg to fit new holes.

It’s been 27 months since “Black Monday,” a day when 70,000 people lost their jobs in America.  Over 15 million are looking for work.  The media has forgotten them, and comments on those few stories still printed show people have lost patience with them and can’t understand how anyone could remain unemployed long term.

I live with one of them.  He has good days and bad days, days of hope and days of despair, days when God seems close and days it feels God is busy elsewhere.  Mine is now working on a graduate degree, that amazing two-year feat that inevitably takes longer than two years and sucks a family’s savings dry with only a hope it will lead to a new peg and a new spot.  He questions his path, and unfortunately his family (me!) has days they question it, too.  But how long does one try to shove a square peg into non-square holes before losing one’s mind?

Here’s hoping God will create spots for all those with the wrong pegs, and that while they wait, the people of God will uphold them, encourage them, and offer practical aid for the most needy of them.  The world says they have little if any value.  The government wishes they would just go away.  But God wishes to collect them, saying “Come, you who are weary, and I will give you rest.”  And trust me, the long-term unemployed are some of the weariest people on this planet.

One thought on “The unemployment parable”